O dear, this is a tragic topic. Nevertheless, I just installed Windows XP on my Intel Macintosh and it was easy! Windows XP set me back $115, but innotek VirtualBox, the program that let me run windows, was free. It’s pretty fast – it takes about 20 seconds to start Windows (that’s faster than my OSX boots!) and about 6 seconds to turn it off.
Why would you ever want to run windows on a Macintosh? Well I can think of two reasons.

1. The Australia Tax office does not put out a version of their tax return software for Macintosh.

2. If you are a web developer, developing on a Macintosh, your sire will probably look great on every browser except for Windows Explorer. That’s because Windows Explorer has lots of bugs in it and doesn’t display things properly. For this reason, it is a must that you test your websites in Explorer. Seeing as Microsoft have stopped supporting Macintosh, the only way to run Explorer on a Mac is to install Windows. What a shame!

So with that by way of excuse, here’s how to do it…

There are a few options to run Windows on an Intel Macintosh. Boot Camp, Virtual Box, Parallels and VMware Fusion. The first two are free. If you just want to run Windows totally separately to OSX, turning off the computer between OSX and Windows, then go with Boot Camp, it works well and it’s free!

Parallels (click here to download) is better if you want Windows applications more integrated with mac – you can drag and drop between windows and OSX! There is also a program called VMWare Fusion (click here to download) which is like parallels but there doesn’t seem to be as much hype about it – I’m not sure why. It’s meant to be faster than Parallels. You can download both for a 30 day free trial and work out which one you like.

With Bootcamp, Microsoft Windows takes over the whole computer. With Parallels Windows runs inside a window. So Parallels is better for integration, (eg you want to run one or two windows programs easily) but Boot Camp better for performance (eg you want to play games).

I decided that I’m certainly not a serious Windows user, so I downloaded VirtualBox. (click here for download page and select binaries – OSX) It downloads and installs like a normal mac program. When you run it, it comes up with a menu, I selected new, and it asked what kind of machine I wanted to make:

I chose Windows XP. It tells you to put the install disk in your CDROM drive, it asks a few questions, like how much RAM and so-on. I just picked the default answer every time. Then before you know it Windows is up and running. It automatically worked out all the settings. I didn’t have to put in any network settings, or load any drivers or anything. It just worked! I clicked on Windows Explorer and it’s surfing the web.

And here it is, Windows running inside Mac OSX…. 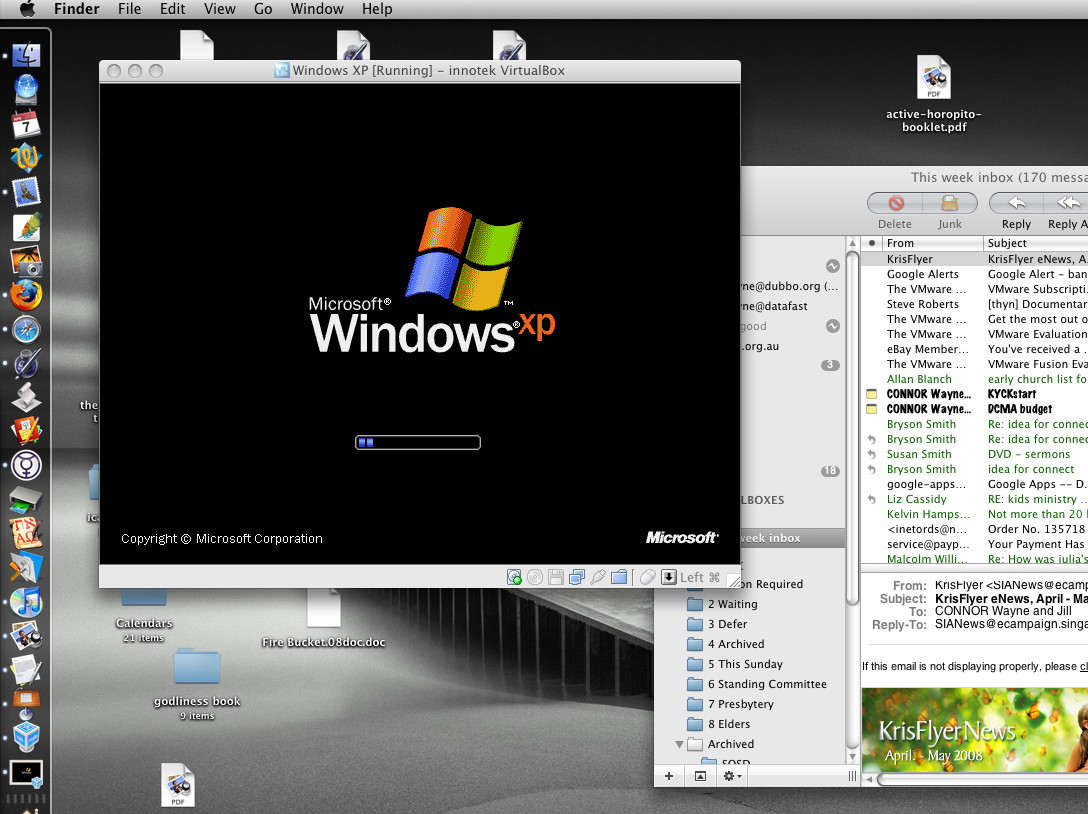 Here are some of the settings. As I said, I know nothing about windows so I just used all the ones it suggested. 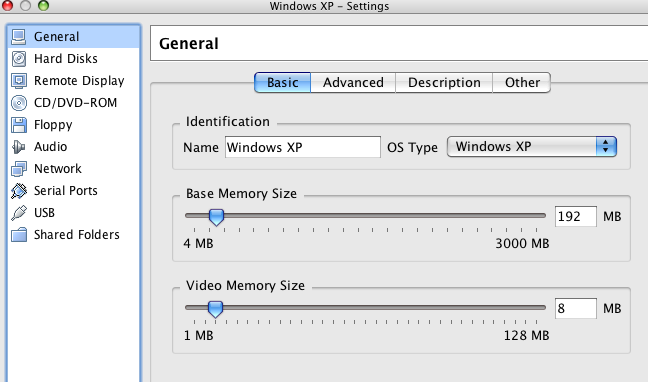 Oh, and don’t go with Vista, reports are it’s a mess. You can buy Windows XP second hand off ebay. I got a Windows Professional Service Pack 2, whatever that means, for $115.