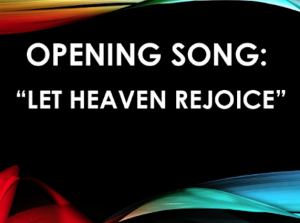 There are lots of different ways you can set up a computer and projector at your churchÂ but after 15 years playing around with various options here is the system we have ended up with at our church. Â We want the words up the front for people to sing along to and we want the singers to be able to read from a screen in front of them as well.
I guess all the requirements of our system can be described as follows:
We have tried a few things but have ended up with something fairly simple…

In terms of software, we use Apple Keynote for all our slides.Â We play it from a Macbook air.
If we want to watch a DVD we rip the DVD onto the laptop first using an external DVD drive with a program called handbrake then play it as as a movie from within a keynote slide.
Â If someone brings along a Microsoft PowerPoint presentation on a thumb drive we can easily import it into keynote. Â Sometimes the formatting changes a little.
If someone brings along a thumb drive with a lot of photos we can simply drag them off the thumb drive into keynote.
We have tried Microsoft PowerPoint, Â it was too clunky to use. Â Even though we had all our files in powerpoint, Â we made Â the transition from PowerPoint to Keynote and it has been much better. Â It was a Â lot of work initially to retype all the slides in, Â but worth it.
We also trailed Â something called â€˜Proclaimâ€™ which is pretty fancy, Â it automatically downloads the song lyrics from CCLI Â ‘song select’, Â it has nice visuals, you can play YouTube videos directly off the web to avoid copyright problems etc. Â But in the end although it had more features it was problematic when we got someone who didnâ€™t know what they were doing. Â It also requires an Internet connection, Â that’s fine but if the Internet is down I still want my presentation to work! The keep it simple principle Â means that we have gone back to keynote. Keynote just works.
We have a master keynote folder with all the songs in it, each song is a single keynote file. Â I have moved this folder to the dock so that I can simply click on it it displays all the songs, I clicked the song I want and it opens. Â This is what it looks like when it pops up a list of songs from the dock:

The song lyrics Â start on the first page of the song file and Â the last page is blank. All we do is open last weekâ€™s keynote, delete the old songs, Â open the new songs, drag Â them across, Â and the keynote is ready to go for this week. We donâ€™t need to add in any blank slides as they are already on the last page of each individual song file.

In terms of hardware, we have a HDMI splitter coming from our computer. It takes the HDMI output from the macbook air and sends it out over cat 6 cable. Â We use a mac display port to HDMI adapter to plug into this unit.

One output from the splitter goes to the projector and the other output from the splitter goes to a flatscreen computer monitor that is sitting on a music stand in front of the singers. Â  There are three spare outputs that we don’t use but we might use them one day.
Itâ€™s a very simple HDMI splitter that cost around $200 or so, it sends the signal over cat 6 cable, and then there is a receiver at the projector and a receiver at the singerâ€™s monitor. We got them from WES components in Sydney.
Â This is what the receiver looks like, it cost $65.

The singers have a Logitech USB clicker Â that they use to change the slides from up the front. Â The range of the clicker was not long enough to reach up the back reliably, so we have a USB over CAT5 extender so that the receiver for the clicker is up the front next to the singers. Â The USB over CAT5 extender cost about $10 off ebay. Â The Logitech USB receiver stick Â plugs into the CAT5 extender, then there is CAT5 cable all the way back to the computer at the desk, and then the other end of the CAT5 extender plugs into the USB port on the computer.
We also have a VPN setup Â where people can watch what is on the keynote from their iPad. Â There is one visually impaired girl who uses this every week. Â She brings along her iPad, logs into the Wi-Fi network, Â and can see the slides on her iPad. Â The singers do they do not use this system – Â there are too many things to go wrong streaming the words over Wi-Fi, Â so I prefer the singers to have a hard – wired HDMI connection to the computer.