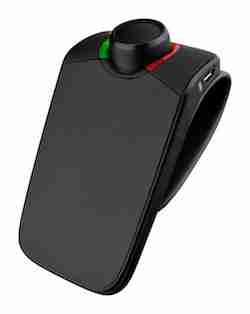 I recently decided to buy a hands-free Bluetooth speaker for my iPhone so that I could make calls while driving. Â I read some reviews and decided to go for Motorola Roadster Pro. Â  All over the web reviewers are singing it’s praises. 9/10, 9.5/10, I even saw a 9.63/10! Â Unfortunately, when it arrived, I discovered that the voice quality of the outgoing calls is woeful.

Here are the three unit’s I trialled,Â I tested the Motorola Roadster Pro, the Parrot Neo HD and the Jabra Freeway. Â I’ve gone for the three most highly rated unitsÂ – most reviews give these three bluetooth car speakers 9/10. They are top of the range.

The Motorola Roadster Pro $99US 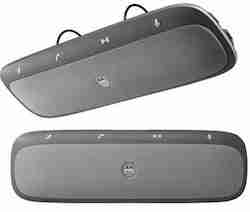 The Jabra Freeway US$129 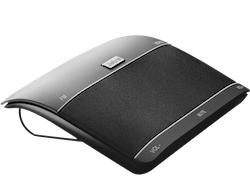 These 3 Bluetooth hands-free kits connect to the visorÂ of your car and amplify the phones speaker so that you can hear it. They also have a microphone in them that picks up your voice better than the inbuilt iPhone microphone, Â and cancels out some of the background noise.

The incoming call quality on all 3 units is fantastic. The parrot was a little worse than the other two, but they were all clear.Â As you drive along in the car listening it’s almost as if the Â other person is right there Â in the car with you – their voice is incredibly clear.

The problem came when I had a listen to what the person was hearing on the other end of the phone! Â I’m thinking most reviewers on the Internet haven’t checked this. What the poor person is hearing on the other end of the line is pathetic! My wife thought I sounded like Davros Â and my daughter said it sounded like I was talking through an old-fashioned tin can telephone. Â And you as the driver are left unaware of this because what you’re hearing sounds great.

I’ve made a recording of each one Â so that you can hear for yourself what it sounds like on the other end of the phone line.

This call starts clearly, Â but then the quality of my voice degradesÂ 15 seconds intoÂ the call. Â For the first few seconds this sounds the best but by the end of the call it’sÂ worst. I’ve been using this microphone for a couple of weeks and this problemÂ is consistent. Â Sometimes I sound like a Dalek. Â This recording aboveÂ isn’t the worst – it’s an average one. Â Overall I’m giving the outgoing call quality of the Motorola a 4/10

My initial impressions were that the Jabra sounded worse than the Motorola. My voice sounds like I’m coming through an old-fashioned a.m. car radio. Â But the volume level is consistent and the quality, Â even though it’s bad, is consistent too. Â In terms of a phone call I think this is better for the person on the other end of the phone. Â 5/10

Like the Jabra, the Parrot distorted my voice. It almost sounds like the microphone is overloaded or something. The Parrot was the worst of all the microphones but also the loudest Â and the most consistent. Â  Â 5/10

Clear but way tooÂ quiet. Â I just put this here for a comparison. Â 3/10

Since this review I’ve been trying these 3 headsets on the road for a few weeks and there is a clear winner.

The Motorola Roadster Pro is by far the best.

I’ve made a video to show you how good it is.

Click hereÂ to watch the video and read my updated review.