The Apple  24 inch LED Cinema display  and the Apple thunderbolt display have been a  source of frustration for many people.   They flickers, go black, the screens gets garbage on them, the fans turn on and off.   After reading lots of forums and trying various things I have practically completely eliminated all the flickering on my  24 inch LED Cinema display,  here is how.

I am running a Mac Mini  and one of these Apple LED cinema displays: 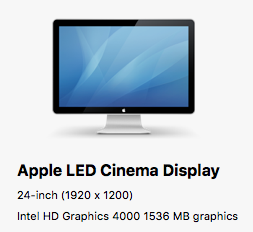 It’s  had a problem with flickering ever since I first got it back in 2009.  It started off that once a day or so it just went black for five seconds.   At other times  the  screen is completely filled with gobbledygook  until I sleep the display and restart it.   At other times the screen just flickers black for a fraction of a second,  but all the fans  in the screen power down and then power up again.  Apple have released various ‘fixes’  to the problem over the years which have never fully resolved  the problem. Phone calls to Apple support were of no use after the first year because they just claimed it was a hardware problem and ‘out of warranty.’  The flickering got extremely bad recently with ‘El Capitan’   and the flickering also got worse when I connected a Pegasus Thunderbolt hard drive.

It’s not just the Apple LED Cinema display that has been affected. Even Apple’s latest ‘stunning’ Thunderbolt Displays have problems too.  The Apple help forums are riddled with complaints…

Apple have released various ‘fixes’ over the years which don’t seem to work:

But if you already have one, here are a few things that might help. 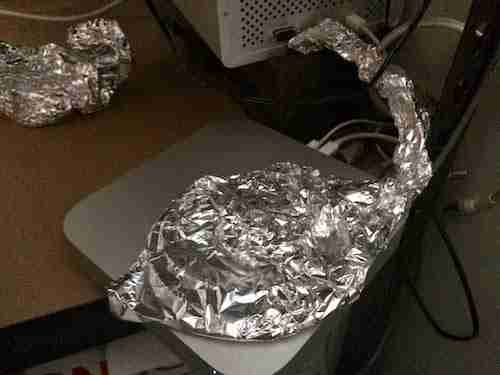 Here I have activated the bottom left hot corner so that it puts the display to sleep. When things get really bad I can put the display to sleep with my mouse without having to see what’s happening on the screen. Then I can wake it up again with my spacebar and more often than not the problem has fixed itself temporarily.

All the best and let me know if anything works!

I still have the same problem with my 2009. It isn’t clear, do you have a thunderbolt cabled monitor? But that can’t be for 2009, right? I have the mini display port. I am wondering what of your fixes would apply and that I should try.

I have 2009. Mini display port. It connects to the thunderbolt external pegasus drive that I have. Try everything till it stops flickering.

Thank you for putting this together. The only thing that helped me was to put the USB connector of the 3-way cable into the Mac Pro, as well. I found this hint in some other forum. Also, I noticed that before using this fix, I had no problems under Snow Leopard, then problems when I upgraded to Yosemite, then no problems when I upgraded to the first version of El Capitan, and then problems again under El Capitan vs 10.11.4. Thus, the operating system version may play a role, also.
Sad as the whole on-off, black-out and flicker issue, I was grateful to see the picture that you included. It made me laugh (no disrespect meant), because it reminded me of similar fixes in 1974 to an IBM card reader. Apple should be doing something about the screen problem, because your picture is a beautiful negative marketing example to me. But, alas, from what I read on other forums, they do not seem to be interested.
Again, thank you.

Are you still using the display? Curious how your fixes have held up or if you have had any success with newer MacOSs.

The display completely died 6 months ago. :-(
Up until then it was working fine.

Thanks so much for this. I have a 3rd party Thunderbolt display that has been working fine for years connected to my Mac Pro. I recently connected it to an iMac and this ‘known good’ display has since been flickering like crazy and driving me nuts. I grabbed some foil tape and wrapped the first 3 inches of the connector where it connects to the iMac (obviously not the metal part of the connector!) Since reconnecting ..not one single flicker. Much appreciate this post!!!

Glad to hear it worked!

Sadly tried all of these solutions on my 24″ LED Cinema Display connected to my MBP. Still flickering and sometimes turning off. Time for a new backlight maybe?

My thunderbolt display was just now flickering like crazy..as it ofter did. I pulled off the connector from the back of the computer and put some fluid film in there..it had worked perfect since. I think there is a issue with the pins getting good contact in the port…

I just purchased a (used) 24 inch Thunderbolt Display that seemed to work well on the macbook pro during the demo.
Back at home it started flickering on both of my 21 inch imacs. I tried the aluminium foil trick unsuccessfully.
Though it seems not recommended, what solved the problem is *daisy chaining a Lacie eSata hub* in-between the imac and the display.

Note the thunderbolt cable is 2 meters which is quite long but the connector is much more strongly inserted in the imac than the display’s one.

Hope this helps your investigations !

Unplugging any extraneous cables and not using the ports on the display (i.e. Thunderbolt, USB) has worked for me. For a company who charges a steep premium for their products and who now has more than $1,000,000,000,000.00 in cash really should think about taking care of the loyal customers who got them there. Maybe each display comes with a free roll of Reynold’s Wrap?

Wow, I’ve never actually written out One Trillion before.

I HAVE HAD THE FLICKERING ISSUE WITH 23″ CINEMA DISPLAY. I tried all 3 methods, no success. I said F@!#$@ it, its broken anyways………<<<<<(KIDS DO NOT TRY THIS AT HOME WITHOUT AN ELECTRICIAN>>>>>>>YOU COULD DIE!)
I cracked open the power supply, remove the board that connects the display, stripped the display cable and soldered the 4 cables. Issue Resolved! The power supply board has 2 cables attached, and so did the display connector once I cut off the head and stripped the cable. I chose the darker color (blue I think) with the black (-) and red with tan (+). No aluminum foil needed. Again, do not attempt this if you are not a certified electrician. YOU CAN DIE IF YOU DON”T KNOW WHAT YOU ARE DOING!