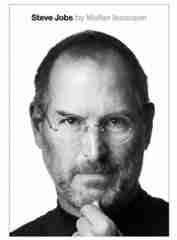 I started reading Steve Jobs biography last week, it’s a challenge. Steve jobs is selfish to the extreme, bordering on evil. It’s a bit like when I read my Johnny Cash biography: I found myself being repulsed by the destructiveness of a man I thought I admired.  It’s so interesting I thought I might take a few posts to write my thoughts.

In his early days no one can work with Jobs. He’s rude, arrogant, and he stinks (literally – he doesn’t’ shower and refuses to admit he smells). He hangs around cult leaders taking a fair few drugs and has no problems using their tricks to manipulate the people around him, He mistreats his closest friends, his parents even his own daughter. As a student he works at Atari where they put Jobs on his own nightshift because everyone refuses to work with him. This is my point – he can get away with acting completely egotistically because people think they need him.

A classic case of his egotism is after the Apple II is launched. Scotty, whose job was to manage Steve jobs personal issues, assigns Wozniac employee badge # 1 and Jobs # 2. Here’s what happens…

Not surprisingly, jobs demanded to be #1. “I wouldn’t let him have it, because that would stretch his ego even more” said Scotty. Jobs threw a tantrum, even cried. Finally, he proposed a solution. He would have badge #0.

Maybe it’s not that Jobs is actually more selfish than the rest of us, rather Steve lets out what we are on the inside.  Like House, he says what he thinks, without regard to any social conventions or thoughts for others.  And he’s just such a genius that he can just throw a tantrum and get his own way and apparently get away with it.  It almost makes me feel dirty using an Apple computer. He really is not the kind of guy you want as a friend. I’ll keep reading thoughâ€¦

I know what you mean about feeling dirty. It’s this amazingly useful, powerful product that’s been made at the expense of so much personal abuse.

I listend to it with Audible.