There was a knock on the door at 10 past 8 this morning – it was the Snow Leopard delivery man. I live in Dubbo, NSW, 6 hours drive from Sydney. Snow Leopard arrived on my doorstep at 10 past 8! I can’t believe Apple’s efficiency!

Install was a breeze, took 45 minutes. I did the default install which installed it over my existing system – 10.5.8.

Computer restarted and I was greeted with the Welcome to Macintosh screen.

Everything seemed quite similar, except one of my two monitors was brighter – the gamma settings must have changed.

When I launched Photoshop CS I was presented with a dialog box saying I needed to install rosetta: 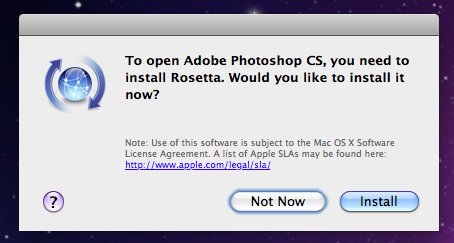 Rosetta is a program that allows the new Snow Leopard on an Intel Macintosh to run old programs. I installed it and and my old Photoshop CS works. So does my old copy of Microsoft Office 2004. Happy about that.

When I first opened mail it asked if I wanted to update/import my existing mail accounts. My heart sank for a while I thought I’d lost all my mails, but it just did some kind of import that took about 3 seconds and all my emails and settings were there.

The most trouble was with Pages. Opened Pages 08 and all my documents were blank! Same with Keynote 08. O dear…

I rang Apple support, here’s one of the great things about Apple – even though my Mac Pro is out of warranty, I get 90 days of FREE phone support with Snow Leopard – not bad for $39!

Apple took about 5 seconds to answer the phone, and about 5 minutes to diagnose and fix the problem. Apparently my automatic software update was confused and I had an old version of Pages 08 (3.0) still there. Upgraded to 3.03 and it was all fixed.

1Password told me it needed to upgrade itself to work with Snow Leopard. It upgraded itself and it works as promised.

Screen Shots instead of being named ‘Picture 1’, ‘Picture 2’ are now named Screenshot followed by the date and time they were taken.

Quicktime has been updated form 7 to 10. QT10 has the familiar share to menu to share straight to Youtube, iTunes or mobile me. THe bad news is that QT10 can’t cut and paste like Quicktime pro could – good thing I still have QT 7. The good news is that it can trim movies (cut off the front and back) straight out of the box without having to upgrade to QT pro.

The only software I have found that won’t work is Macspeech Dictate – a bit disappointing.

Actually I just upgraded and it works, but the upgrade is almost $100 – a good cashcow for Macspeech. I went to their site but couldn’t see any option apart from a paid upgrade.

Overall Snow Leopard works well and things seem to be a bit zippier in the finder and Safari. I’m not blown away by it yet. My mac pro is not real stable, applications crash a couple of times a day, and Snow Leopard has shown no improvement on that. It used to be pages that was crashing the most, but now it’s Macspeech dictate.

UPDATE: Just noticed that my canon imagerunner IR5000 printer DOES NOT WORK with Snow Leopard – and from what I can see there are no drivers for it at this stage. Very disappointing. This is something to be aware of. Thankfully I have a HP8150 that works fine.

UPDATE: Canon have released drivers that will allow you to print to your Image Runner. Download them from here. When you add the Printer, select IP Printer and LPD Daemon, select GEneric Postscript Printer. It doesn’t see all the options like different trays, but it does print at least.

Thanks for forging ahead Wayne and checking compatibility for the rest of us.

I am a martyr.

Hey, I have a iR5075 at work and my snow leopard didn’t work with that either. I reinstalled the drivers from the canon website, deleted the old printer and set it up again and it worked fine. It is the only problem I have had so far with Snow Leopard. I like the extra little bit of speed that I am getting! And Quicktime 10 is nice!
Good Luck
Israel

I juts discovered that a little application I use alot doesn’t work… Cocoa booklet. Rats

They say this is better than cocoa booklet but it’s shareware ($35).

It was Pages 3.03 and you just do it via software update on the Apple menu.