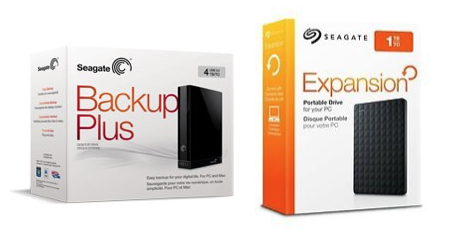 Seagate make two external USB drives.  The Seagate Backup Plus and the Seagate Expansion.  They are both USB 3 compatible.  They both come with a three-year warranty in Australia, although in the USA the expansion only has a 1 year warranty.  The Backup Plus model costs $20 more.  A lot of reviewers say that the backup plus is more reliable (e.g. this one). But is there any difference?   I pulled them apart to see!

I went down to our local Officeworks store and bought a 2TB Seagate backup plus for $129 and  a 2TB  Seagate expansion for $109.

I opened them up to see what was different, and did some tests.

Here is what I found…

It turns out the hard drives are exactly the same!

On the left is the drive out of the Seagate Backup Plus,  it is labelled ‘Desktop HDD’.

On the right is the drive out of the Seagate expansion.  It is labelled ‘Barracuda’.

But take a look at the model number ( you may need to click on the picture to enlarge it).  They both have exactly the same model number –  ST2000DM001.  This is Seagate’s low-cost desktop hard drive.

So the Seagate backup plus and the Seagate expansion have exactly the same hard disk drive inside them.

In terms of  hard disk reliability, seek times and so forth  it makes no difference whether you get the backup plus or the expansion.

For this reason,  if you are just connecting them to your Apple Macintosh computer to use as an external hard drive for some extra room,  or to backup,  it doesn’t make a difference what model you purchase.

The names are misleading…

You can use the ‘Backup Plus’ for expansion.

You can use the ‘Expansion’ for backup.

So are there any differences?

7 replies on “Seagate Expansion and Backup Plus pull apart – what’s the difference?”

Those Seagate drives that you have mentioned all work on Macintosh computers. The 2 drives I have mentioned in this article (Expansion and Backup Plus) are exactly the same in every way. Thanks for the feedback. It’s something for Windows users to be aware of.

That’s not really true, Seagate only means “support” in the most simple of terms meaning “will you not have to do anything more”.

You can in fact use them, if you merely put a 2TB partition on there and format to 512K block size. It’s just the factory formatting that differs with their older models having 4K blocks.

Hello! Can you tell me what HDD is inside? does it is ST2000LM015? I want to upgrade my laptop HDD. Seagate external hard Drives are cheaper than 2.5″ HDDs like barracuda in amazon. if inside of a Seagate Expansion is a barracuda HDD, I simply can buy it and then i have a free Enclosure. what’s your opinion? Thanks!

Yes this is a good option. The hard drive in the photo is the one from the external drive and if you can get it cheaper than an internal drive definitely go for it. It is exactly the same drive.

I have also done the same mistake while getting the hard drives. I got confused between both of the versions of Seagate HDDs. But after buying I verified it through https://babasupport.org/data-recovery/data-recovery-dubai/ that both of them are the same with just different names and packaging.