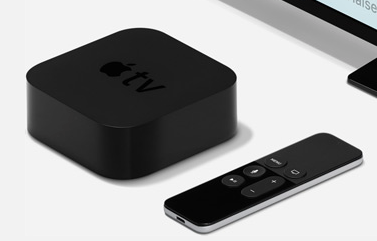 I’m a great fan of the Apple TV so I’ve been waiting a while for the release of the new model. The day it arrived I went to the Apple store but just as I was about to add one to my cart, I had to choose between a 32GB or  64GB model. (Apple’s first mistake. This is way over complicating things).  So I went to check out the tech specs and it was there that I noticed something so stupid that it is giving me flashbacks of  1985-97 apple years…  The Apple TV has no audio out.  No I am not making this up. The new Apple TV has no audio output.  No line out. No optical out. The audio signal comes only on the HDMI cable to your TV.

What’ the problem with this?

It means you can’t plug your Apple TV into an analog stereo amplifier (which is what a lot of audiophiles prefer.)

You can’t even plug it into a stereo that has a digital audio input.

You can’t plug in a set of headphones.

You can’t plug it into a set of powered speakers.

Even the new iPad air with is minimalist one port design has an audio out port on the opposite side!

There are lots of work arounds appearing including streaming the audio from your new Apple TV through your old Apple TV, buying an apple airport express to stream the audio, buying a new stereo which can extract the audio from the HDMI, or buying a stand alone HDMI audio extractor.

Or there’s the simpler option, stick with the Apple TV 3rd gen and tell Apple why: http://www.apple.com/contact/feedback.html

So there will be no review of the new Apple TV here because I’m not buying one!

I’m on the same page as you. No audio out, I’m not buying. But I did notice that my Gen 2 Apple TV didn’t have analog audio out, but just optical (S/PDIF) audio out.

Yes but for about $50 you can but a very good quality spdif to RCA adapter (which is what I am using). And lots of stereos have optical audio in. I don’t think there are good HDMI to RCA adapters, plus you need the HDMI signal to go to your TV! It’s a dud.