Last year I bought 5 non-working ipods from ebay and fixed up 4 of them. It was not to hard, but there was a couple of tricks. I’ve finally found some time to write up the hard bits, just in case anyone is interested, so here goes. This is not for you to try at home, lest you break your ipod!
The hardest part is opening the case.

I found the best tool was part of a stanley knife blade, the type that you break when it gets blunt. You can see the kind of blade I mean in the picture below. Two segments of the blade are carefuly inserted into the side of the ipod, at the angle seen in this picture. 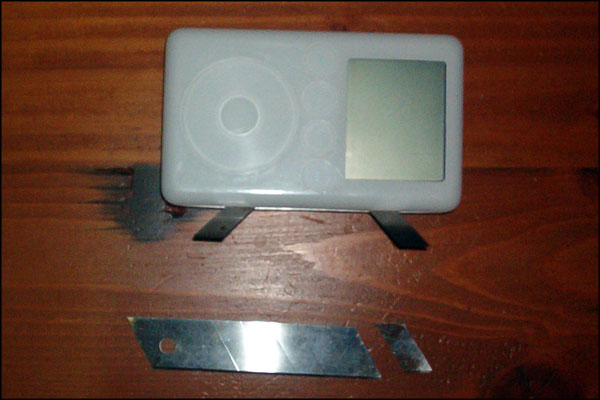 When they are pushed down a little, the metal case opens a little. Then a third can be inserted in the middle. Then add a fourth fifth and sixth in parallel with the first three to force it a little more, the gap opens a little more with each blade inserted, until it finally pops open on one side like this: 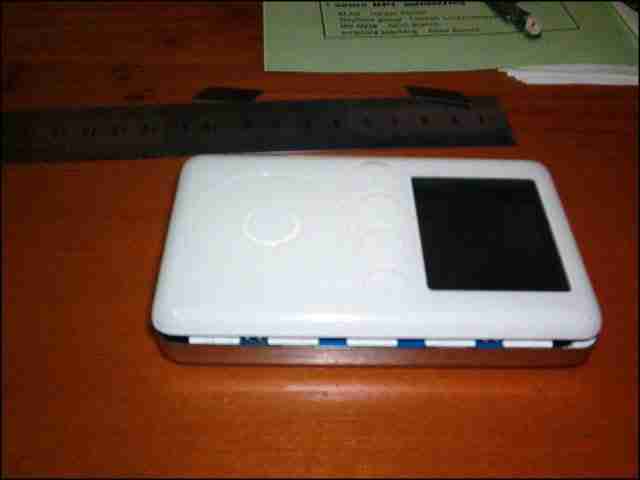 Now you insert the blades into the top, above the hold switch and near the headphone jack symbol, careful not to push in too far and damage any wires with the blade. The case then pops open as follows:

The metal back is now separate to the plastic front, but be careful, the headphone jack and hold switch are part of the metal base – have a look at the pictures below.The white square in the red circle is the connector, it needs to be very cafefully prised apart with the knife blade. I used the long knife blade in the first picture above to do this.

Now the plastic case and metal back will separate apart. From the picture below, you can see the hard drive sits on top of the unit. It pivots on the right, but if you pivot it and try to lift it you will porbably break the connector, so you have to carefully insert part of a hacksaw blade in the gap between the HD connector and the main PCB board. Pivot this hacksaw blade down and the HD connector will pop open, allowing you to remove it. The third picture (bottom) shows me pressing the connector together as I re-assemble the ipod. The connector is under my pointer finger, it needs to be moved around till it clicks into place, then firmly pressed. 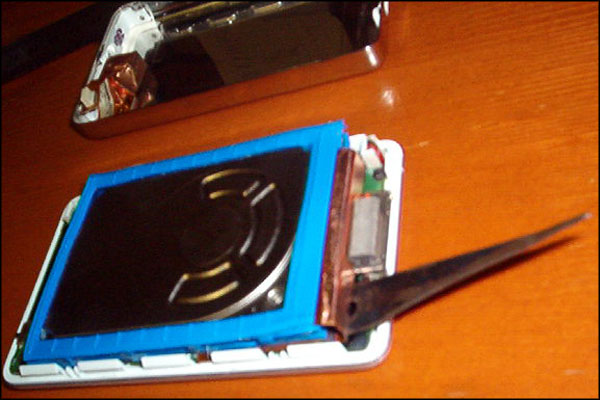 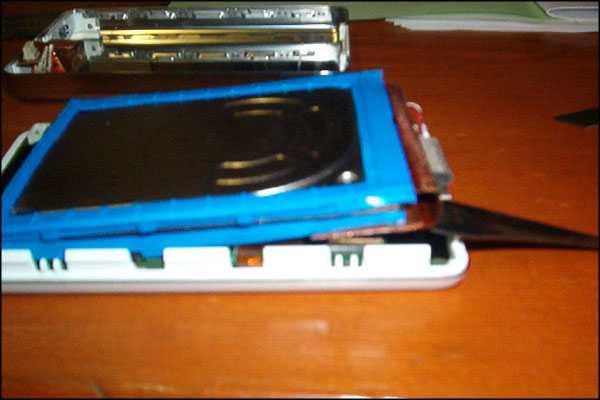 The battery and main board just pull off and there are some small torx screws. There is a little connector that connects to the front that is tricky and needs to be prised apart with a blade, as seen below.

Happy ipod-ing, and I hope you never need to do this!

If you press down the two middle buttons, menu and play, the ipod will reset. When the apple logo appears hold down the other three buttons (forward, back and the botton in the middle of the wheel). When the screen goes blank, release and you will be in diagnostic mode, with this menu:

They select with right and left, not the scrollwheel. Some handy ones are:
D tests the audio, handy if the HD is not working but you want to check the audio section,

My ipod is still going a year later, enjoying it very much.

Is it best to let my ipod battery go flat like a nicad battery or keep it fully charged?

The ipod has a Lithium ion battery in it, which means it is best to keep it as fully charged as you can. Every time you discharge an ipod battery, it destroys the battery a little bit, until after about 300 uses, the battery will be totally dead. So it’s best to charge your ipod battery as often as you can and leave it on the charger when not in use. The same applied for all the new apple powerbooks. For example, it’s better to use it for 1 hr, charge it, then use it for another hour, then charge it again, rather than use it for 2 hours. This is exactly the opposite of nicad re-chargable batteries which we are used to.
So for ipods, keep them charged, charge them regularly. Try not to let them get too flat.

My ipod took a very small dive and now complains of hard drive problems.. so I am going to ship it back to apple. Very annoyed.

It’s worth adding that if your iPod refuses to go into Disk Mode and you hear a noticeable clicking sound the problem might just be corrosion on the HDD cable and will need cleaned periodically.

ooh, you should try that with an ipod nano

thank you for the information. However, the problem I have encountered it that the ipod does nothing. I have three ipods behaving that way. Can anyone advise how to even start any repairs?