This is the results of a survey I conducted over a year to see what different models of the G4 ibook are affected by the logicboard fault.

The symptoms of the fault are as follows:

Here are the results of a survey I conducted here on macintoshhowto.com over a period of 6 months regarding the affected models. It appears all models are affected. 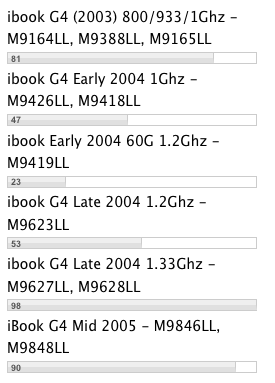 In this article I described the fix for this G4 logic board fault. This survey was to test what models were impacted.

[…] WRONG.  It appears even models with the new motherboards are affected.  I have started a survey here of the affected […]

Our G4 14″ model appears to be 4H5422G9SE9 â€”that is off the service sheet. There are other numbers on battery etc but don’t know where to find model number that resembles those listed above. After light domestic use, it has been deemed unrepairable: logic board failure. Told 0 about the history attached to this malaise. Found out from web about it. On the phone to Aust. for nearly an hr. Loud music, shifts to 3 people with final declaration great apologies but no exception to be made: No help. 1) It is staggering to find there is no Apple command in NZ 2) that logic b failure is endemic to certain ibooks, one of which we presumably had the misfortune to buy. And why consumer guarantees means 0 to Apple? And what to do next as loathe to dish this much valued laptopâ€¦

My model was impacted by this as well. I’m so glad to find out that I wasn’t the only one suffering from this (and that it wasn’t my fault, like my brother told me)!