This is the latest craze: google cardboard. It’s real fun. Here’s a quick introduction and how to get it working on your iPhone.

Basically Google cardboard is a little cardboard box that you put your iPhone into. (Actually it’s designed for an Android phone but it works with an iPhone and there are iPhone apps for it.) It has some lenses in it, and it combines 2 different images that appear on your phone, so that it feels like 3D.  You can move your head around and look at different things and the image moves so that it feels like you are really there. This is called virtual reality.

Here’s a very quick demo of what it looks like:

It’s very simple, here’s how to get started…

I bought 2 from eBay, both were under $10. One was a complete dud and pretty hard to assemble. The other was fantastic and went together easily. 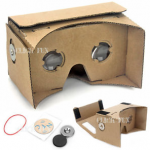 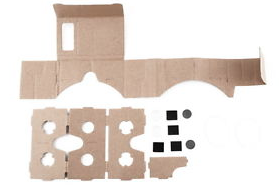 The first one was all in one piece, the lenses came already in the cardboard and it came with the velcro and double sided tape in the right places ready to go. The second one had the lenses and velcro separate, and with no instructions it was hard to put together properly although we got it going in the end. 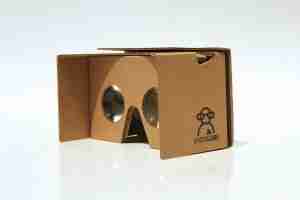 You can also buy plastic ones that don’t need assembling at all, like this, but to tell you the truth a big part of the fun was putting it all together.

To find one search for ‘Google Cardboard iPhone’ on eBay and order one. Mine arrived in under a week.

Put your Google cardboard kit together. Mine didn’t come with instructions and I couldn’t find any assembly instructions on the web at all!

There were plenty of Youtube videos though. Here is one of the better videos showing how to assemble the kit:

A couple of notes:

The phone can slide around a bit in the box so I actually found it worked better keeping the my iPhone in it’s rubber case.

There are some good apps for Google cardboard.

Go to the Apple App store and search for ‘google cardboard’.

Here’s some I recommend:

Google Cardboard: a very simple app to get you started. You can visit various places like the colosseum, the Eiffel  tower and have a look round. Move your head to look in different directions. Click the button to take a step. It’s like you are there!

Moorente: a game where you shoot birds, pretty simple but easy to work.

Virtual Reality: takes 700MB but wow! It’s like a movie but you are in it. The movie is a bit boring but the experience is good , especially looking down on New York from the helicopter.

Run the app and put the iPhone in the Google cardboard headset.

Move your head around. Slide the magnet to click. Be careful that if you walk around you don’t bump into any walls. And try not to get motion sick.

This is more of a novelty than anything useful. The apps are a bit lame but it’s a good bit of fun and the kids loved it.

I really like this site. Your articles are very informative and the design of it is esthetically pleasing, including the images and especially your logo ( I am a graphic designer and appreciate good design). Thank you for putting this out there!